I selected the chicken for my animal of interest because the chicken is a domesticated animal, meaning they have a co-dependent relationship with humans. This has a major impact on the way chickens live their lives and I thought I could observe some interesting social behavior amongst the chickens.

Phasianidae includes pheasants, quail, junglefowl and partridges. As it’s such a broad classification it contains the sub-family Phasianinae, which is where chickens are located. 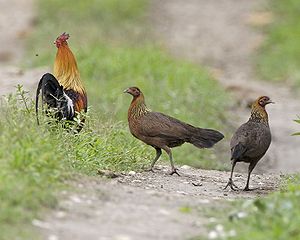 Chickens are a variety of sizes but are usually between 12-16 inches tall. The species experiences sexual dimorphism, with males being much larger than females. Their knees bend backwards, like any bird, but they are too stout with too short of a neck to be suited for running fast.

Chickens are extremely vocal creatures and are constantly making noise. Hens make a warbling chirping sound that is called clucking.  Hens cluck when they’re excited, which can be when they find food, when someone’s coming, basically whenever anything happens because chickens are very easily excited.

Roosters are very well known for their vocalization. Roosters make a loud crow with their vocal chords that is actually very melodic. I don’t mean melodic in the sense it’s nice to hear I mean the call follows a melody. Everyone is familiar with “cook-a-doodle-doo!” and while it sounds simple it is a complex bird call.

While chickens are related most commonly to red junglefowl, which live in Southeast Asia, because of domestication by humans they can be found all over the world. Almost every culture in the world eats chicken and chicken eggs if they are able to produce them.

Chickens are similar to any other domestic animal in that their biggest activity is eating. They spend the vast majority of their time pecking at feed left out by the farmer, and also digging for worms. Every chicken coop has one, and only one, rooster. The rooster breeds with all of the hens in the coop. One interesting dynamic between roosters and hens is while feeding the rooster will call the hens over to eat.

The hens that I observed didn’t have a rooster, as it’s illegal to keep a rooster within city limits. I discovered that the four hens remained in groups of two at all times. Two of the chickens were striped black and white and two were a solid brown color. I observed that the chickens of opposite color patterns paired up with each other, and in both cases the black and white chicken was dominant to the brown chicken.

Chickens’ closest relative is the Red Junglefowl of Southeast Asia. It is believed that the chicken was originally domesticated in Southeast Asia around 6000 B.C. The chicken made its debut in Europe around 3000 B.C.

A favorable trait of chickens for domestication is their flightlessness. Their inability to fly gives chickens a very small area that they can travel, making it easier for chickens to get close to humans and develop co-dependent relationships with humans. Also, flightlessness makes chickens capable of getting fatter and tastier than other birds. Chickens lay eggs very often, more often now that we’ve bred them for that purpose.

Here’s a map of some noteworthy cultural landmarks from around the world that feature the chicken. 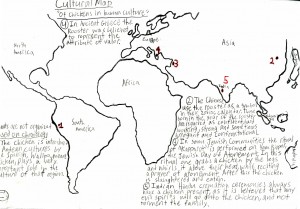 Chickens are very entertaining as the subjects of cartoons, and I had a lot of fun drawing and animating them.

These are some of the drawings I did this quarter. 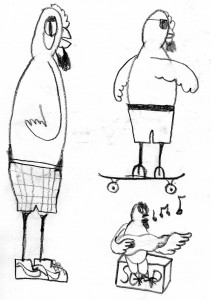 Myself as a Chicken 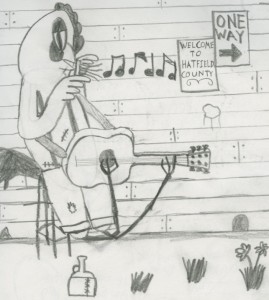 The Influence of the Chicken on Rural American Culture 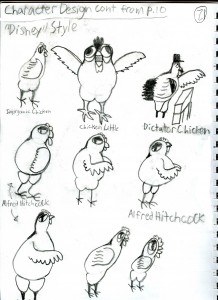 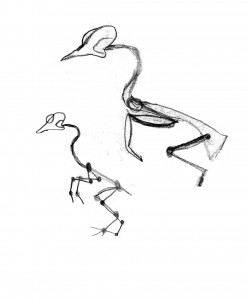 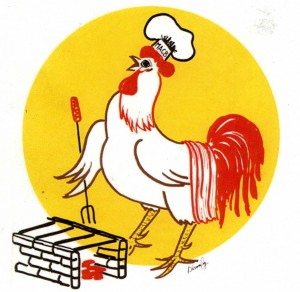 The Visual Subject of "Ekphrastic Writing"

He’s laughing, throwing back his head as though he’s lining out. His whole body is like a bow, drawing back, building up, then firing an arrow tipped with his smiling eyes; his jovial laugh is the whistling in the feathers.  Such contentedness as he cooks his own kind, we can all be such cocks sometimes.

The rooster stokes the coals with a long two pronged fork clasped in the feathers of his right wing. A white chef’s hat adorns his head, the excess skin of his waddle tucked into it to keep it from falling off. The most elaborate vestige of his human appeasement is the white cloth draped across his back, which he cannot use himself and was certainly adorned upon him by his owner. He wears it as a badge of pride. Looking closely at our friend we see him as a shape shifter, a chameleon, who has so brilliantly fashioned himself, or been fashioned rather, into a man. When we take a step back, however, we see that he’s just another chicken at a chicken broil and won’t end up as anything besides heartburn.

Between Me and You

You tussle and fight,

Just so you can stand atop a hay bale stage,

Elevated, and performing just for me.

Between us sits space,

Though not a whole lot,

And a chain link fence,

But it’s flimsy and short.

There’s another space between us,

That you can’t see with your eyes,

Every thought that can’t be spoken,

Every utterance that sounds garbled and alien.

So here I stand,

With every luxurious amenity,

Shoes on my feet,

Shirt on my back,

And with pencil and paper,

And the written word,

And the prose that my teachers taught me,

And those lines and perspectives too,

I wonder if there’s anything bigger than me.

Shlomo Deshen. The Kol Nidre Enigma: An Anthropological View of the Day of Atonement Liturgy. Ethnology , Vol. 18, No. 2 (Apr., 1979), pp. 121-133. Published by: University of Pittsburgh- Of the Commonwealth System of Higher Education. Article Stable URL: http://0-www.jstor.org.cals.evergreen.edu/stable/3773286

Vestige
Noun. 1) A mark, trace, or visible evidence of something that is no longer present or in existence. 2) A surviving evidence or remainder of some condition, practice, etc. 3) A very slight trace or amount of something. 4) A degenerate or imperfectly developed organ or structure that has little or no utility, but that in an earlier stage of the individual or in preceding evolutionary forms of the organism performed a useful function. The Animated Bestiary, Wells. P
Rooster
Noun. The male of domestic fowl and certain game birds; cock. Animal Dictionary.com
Galliformes
Noun. Pheasants; turkeys; grouse; partridges; quails; chickens; brush turkeys; curassows; hoatzins Animal Classification Dictionary.com