Photograph of a Western Gray Squirrel, contributed by the user Fish Demon of Wikipedia.
Introduction

Conservation Status : Least Concern
Place of Observation : A tree ~17 meters from my window observation site
Original Geographic Site : Pacific Northwest and Canada
…
Occupying the entire western coast of North America, the western gray squirrel (above; sciurus griseus) is a rodent that nearly everyone is familiar with. Their abundance makes sighting one as simple as looking out a window. Luckily for me, just outside of mine some trees seem to have become a regular meeting place for two squirrels in particular. My observations of these animals are based both on this gathering spot for two neighboring squirrels and on random encounters with squirrels throughout Olympia, Washington.
…

My work during and after each observation consists of both realistic and creative sketches, timed note taking, and some experimental methods of recording behavior. Below are examples taken from pages of my Animal Book. The Animal Book is a program assignment in which I recorded all observations, research, notes and sketches taken or done during the program quarter. I did not restrict the work done in my book to squirrels alone. Instead, it became a sort of sketchbook with a strong focus on squirrels; an outlet for me to produce both personal and assigned work. 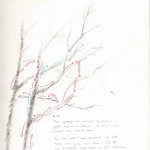 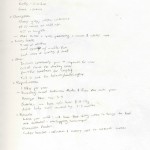 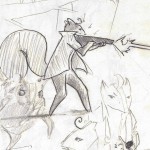 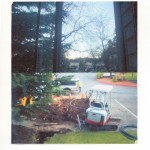 A work crew at the base of the trees I observe 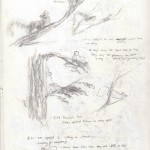 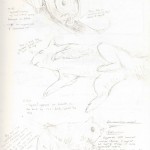 First described in the notes of Lewis and Clark, the western gray squirrel is the largest of its family to occupy the forests of the western United States, reaching up to two feet in length and weighing up to one kilogram. Identified by its light gray/silver fur and white undercoat, the gray squirrel can be seen foraging for food at both ground level and in the branches of trees. Surviving primarily off of a diet of fungi, seeds, and nuts, the gray squirrel is active year round. Even during harsh winters will it venture out in short bursts in search of food. In preparation for winter, it hoards food and stores it in various locations, such as nooks of trees, burrows and their nests, which they make from sticks and strips of bark. Utilizing a keen memory and its olfactory senses the gray squirrel is capable of finding its scattered caches of food, which may span an entire homerange. It also makes use of its well developed hearing and eyesight to keep aware of potential threats, of which there are many, including hawks, owls, coyotes, mountain lions and humans.

After a gestation period of less than two months, the average amount of 2-3 young are cared for in the nest and will remain there for at least six months. Upon maturing, the kits are recognized as individual adults. Each individual squirrel has its own homerange; an area in which it conducts much of its living. The homeranges of multiple individuals may overlap. In these cases the individuals interact regularly, maintaining relationships with neighboring squirrels. This aids in negating the necessity for aggression, although females will still become violent in defense of their young.

Two squirrels get into a physical altercation over seeds Norse mythology revolves around Yggdrasil, the world tree. It is said that upon this tree is all that exists. Unsurprisingly, a squirrel may be found traversing the branches of Yggdrasil. Ratatoskr (left), as the ancient Norse have dubbed him, is the messenger of the gods. This ancient squirrel’s purpose is to deliver messages between various animal deities that live among the branches and roots of the world tree. It is also said that Ratatoskr continuously gnaws on the tree, representative of the cycle of destruction and regrowth present in Yggdrasil. In the words of Odin, from the mythological poem, Grímnismál:

“Ratatosk is the squirrel who there shall run On the ash-tree Yggdrasil; From above the words of the eagle he bears, And tells them to Nithhogg beneath.”

Scrat from the film Ice Age

Scrat (right) is an energetic and agile ancestor of the squirrel, and stars the Ice Age films. The design of his character emphasizes his attentiveness (large eyes) and his ability to seek out food (long nose). A major aspect of Scrat’s personality is his determination. Each of his scenes feature his overcoming of dangerous obstacles in order to obtain an acorn. Unfortunately for him, failure is usually the outcome.

In a rather comical response to an image of a gray squirrel climbing the leg of an anonymous person (posted on Reddit.com, the image is no longer available), Reddit.com user Sigfreedsolomon states:

“I live in London, that squirrel is either doing recon for food, or is about to take your wallet. Squirrels are a real problem here, worse than foxes, squirrels were a main cause of the London riots. A walk through a bunhill cemetery is nearly always accompanied by a squirrel based mugging, to fuel their ever increasing business of identity theft… again another problem with small mammals in the greater London area.

“The trains here are also extortionately expensive, which I suspect may also have something to do with the squirrels… Only the grey ones, the red squirrels (now almost extinct after the genocide committed by the greys) are much nicer. Red squirrels have been known to provide small business loans, and used to be an integral part of the provision of housing to the poor. But that’s long since stopped since the grey squirrels arrived.”

While clearly exaggerated, this response suggests a negative attitude towards the American gray squirrel ever since its introduction into Europe.

This is a short, hand-drawn animation that I created. The idea behind this assignment was to first design a character that depicted both the animal and qualities that may be associated with it. I then created an animation that demonstrated observed pure-animal behavior and some fictional behavior of my own invention. The animation depicts a squirrel who has entered into an unfamiliar existence. Aided by its seemingly human-like intelligence, it manages to escape. To where, not even I know. The title bestowed it is not; given, but only for lack of a better one. Visually it is a memory of an observation of what used to be, as it had yet to be touched upon by man, absent from his thoughts. And at that time it had yet to exist as we presume it might have in the absence of our acknowledgment – that recognition by one’s consciousness of an other. Instead, for now, in this captured moment, it is uncorrupted.

This is short paragraph I’ve written to accompany a drawing by Mike Lurking (above; titled Squirrel). Although very abstract, it hints at the idea that Lurking’s drawing displays the essence of a squirrel before the very concept of the animal has entered the consciousness of a human and become subject to anthropomorphism. This is the cover for my Animal Book. Created as an intended reflection, the drawing (above; titled Squirrel Portrait) portrays both how I felt about my own work throughout program and my reaction to finally completing what has been the longest ongoing project I’ve undertaken.

Rodent
Noun. A gnawing mammal of an order that includes rats, mice, squirrels, hamsters, porcupines, and their relatives, distinguished by strong constantly growing incisors and no canine teeth. They constitute the largest order of mammals. The New Oxford American Dictionary The Essential Hamster
Gestation
Noun. The carrying of young in the uterus: pregnancy. “The adult male stays with a tigress only during the rutting season, and incidentally perhaps, during the gestation period and briefly thereafter.” Boomgaard p21 Definition Source: merriam-webster.com
Anthropomorphism
Noun. An interpretation of what is and is not human or personal in terms of human and personal characteristics.