Domestic sheep are found all over the world, wherever their are humans. Originally they are from Mesopotamia.

I have been observing two, Rosa and Leda that their home on the Eastside of Olympia. I wanted to spend time with sheep because I have always lived in a city and farm animals are as exotic to me as more rare animals that might be found in the wild or a zoo. I am also very interested in Christian imagery and mythology that involves the lamb and the sheep.

white sheep picks through blackberry brambles to eat leaves. There are no berries yet. The darker one wanders close by. She goes up on the porch and stands. She moves over to the side of the house and stands. She eats black berry leaves. She walks over to the drive way and sniffs a plastic bag that a newspaper came in at one time, maybe a week or so ago.

They seem pretty unaffected by thorns. Thick coat? Thick hide. The darker sheep scratches her belly with a back hoof. She is eating grass now, and the white one is still eating blackberry leaves. They are startled by a passing car slightly. Both their bodies tense and the ears and then heads turn towards the source of the sound.

The darker sheep makes several (three or four) half-hearted attempts at scratching her belly with a back leg. None of these motions leads the hoof to its intended target.

The darker sheep scratches its right front leg with its left back leg in a series of quick, succinct motions. When flies land on their bodies (?) they do something of a shake/twitch motion.

Both sheep are now eating from low hanging branches of a tree close to the street. I should find out what types of trees these are in their “habitat.” There are lots of trees with white flowers that fall of in the wind and litter the ground (lovely). The dark sheep returns to the space beside the porch and sits down. It’s not very hot today, and overcast. Maybe 70 degrees out and a slight breeze. The dark sheep lies down. The white sheep has gone back to eating blackberry leaves

The white sheep walks over beside the darker sheep. She (white) scratches her butt against the corner of the house and stands next to the dark sheep who is still lying down. Both are chewing.

It would be hard to make music for sheep, since it seems like they hate any and all sounds. There was a very pleasant creaking/crack/breaking sound as they trampled over the blackberry vines. Most of the blackberry wood is dead or winter-dormant. It is very brown and dry. There is new growth too, green shoots, but they are not the majority of the plant material. There’s more green than there was last week, though.

Do sheep like the sounds they make themselves? Do they like the sounds of other sheep? Is bleating always a distress call? I guess a mother would “like” the sound her babies made. The tempo of a heartbeat is pleasant to all mammals?

The white sheep lies down beside the dark sheep.

The red hen came out from behind the house. After a few minutes she was followed by the large black hen. They like to scratch and peck (is there a better name for the way chickens eat?) around this one tree and bush (the bush is the size of a tree). They also looked for bugs in this area the last time I was here. There is a patch of ground that is brown, free of grass. There is plenty of leaf litter. The ground here is brown probably from a combination of being just under the tree and bush and from the consistent chicken scratching.

The sheep seem content, but spend most of their time looking in my direction. They are not afraid of me, but they want to keep aware of my presence at least, since I am not a usual part of their environment.

The red hen has hopped up onto one of the low lying branches of the bush. The black hen follows her lead and sits on another branch. There is no food for them in the branches (?) They sit and groom their breasts. The small brown hen has joined them in this part of the lawn but she is scratching for food beneath them. The large black hen hops down and returns to searching for food. The red hen hops down and does the same. All three move toward the porch. The red hen is the leader, then the black. The small hen is last. She must be young, I’m guessing, and will fill out next year. Are these all the same breed of chicken?

The sheep chew occasionally and very slowly, compared to when they were eating forage earlier. They are chewing cud?

The large brown hen has emerged from an unseen place and is scratching and pecking around the porch now, too. She is the largest hen.

The brown sheep is watching the hens. The white sheep has been staring for sometime at a place in the yard where, as far as I can tell, there is nothing of interest. The brown sheep lifts her nose up to smell for something. If she smells something, she appears not to react to it. There is a cardboard box beside the house, about 3′ x 2′ and open. It’s unclear if it is empty. I think it was for apples, based on a graphic on the side. The brown sheep head-butts this box several times. She uses not all of her strength, but is utilizing the weight of her upper body. Her forelegs and chest move with her as she head-butts. When this is accomplished, she lies back down. The box is between them now, the white sheep on the right side and the brown sheep on the left. They both chew cud.

The small brown hen is on the concrete porch, pecking at the ground. She can’t be finding any food, can she? Do chickens see what they are pecking at with their necks/heads erect? Are they aiming for something each time they make that pecking motion or is it chance? Is it a combination? Bird eye sight is well-developed, but it’s such a fast motion. I have seen them catch bugs/worms before (last week), but it’s certainly not with every peck that they return with a mouth of food.

I remember reading a book when I was a child where the narrator was, for some reason, able to transport himself into different animal minds and experience their consciousness. He remarked that it was tedious to be a sheep since they are constantly being startled by the same phenomena everyday. Rain, startling. Passing traffic, startling. The rising or setting sun, startling. It surprised me how accurate that is. This more or less seems to be the reality of sheep life, constant starts and reacting in fear. They live such a quiet, peaceful life here. Why don’t the goats react to the same degree? Are they smarter? They seem like it. How related are goats and sheep? Domestic sheep are a sub-species of wild sheep, so they can interbreed. Has this fear been bred into them, maybe accidentally?

Both sheep are still laying together by the side of the house, with a cardboard box in-between them. 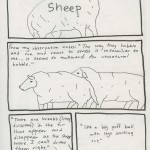 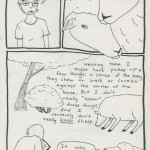 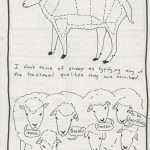 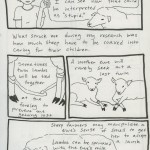 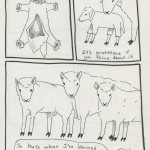 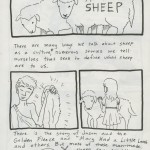 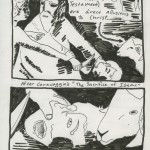 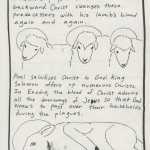 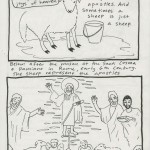 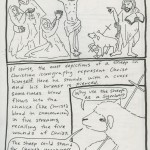 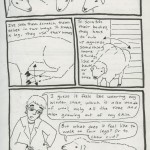 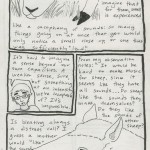 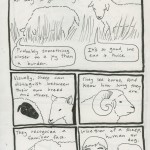 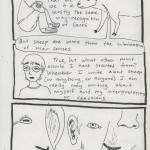 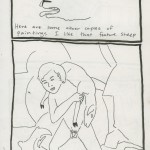 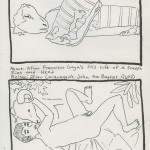 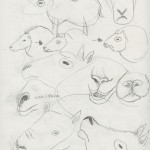 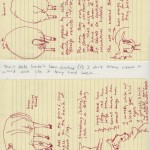 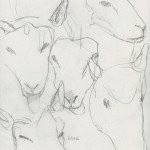 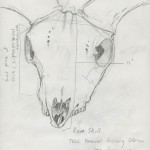 This comic essay contains the culmination of my observation and research involving sheep. Below is the bibliography, divided into citations for the text and the images of paintings that I drew from. There are four pages of sketches and notes

Hen
Noun. The female of the domestic fowl. "Animal" Dictionary.com