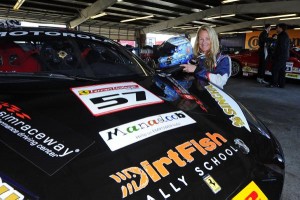 Throughout years of research and development in the labs of Boo-Shoot Gardens in Mount Vernon, Washington, Jackie Heinricher ’86 was convinced the company’s research greenhouses were the hottest office spaces she would ever have. After more than 15 years as chief executive officer of the biotechnology company now called Provitro Biosciences, “Racer Jackie” stepped into an even hotter office, the inside of an unventilated race car in the Ferrari Challenge North America Series. 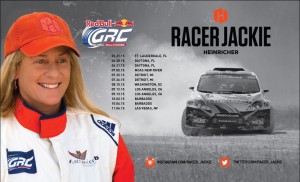 In the 2014 Ferrari Challenge Series, Heinricher qualified for the World Finals in Abu Dhabi, driving a 2012 Ferrari 458 Challenge Evo. The 2014 series was her first year on the racing circuit, competing in eight domestic races including at Daytona, Sonoma and Watkins Glen. In the series, racers drive at well over 200 miles per hour in sprint format professional racing. In 2015, Heinricher has taken on yet another new challenge, competing in the 2015 Red Bull Global Rallycross (GRC) season. She has five races under her belt already this year, including at Daytona on June 21, and will next be in North Carolina on July 5.

Heinricher describes racing as “a young person’s sport,” as well as a male-dominated and dangerous one. She has been in two serious, “high speed and very violent” wrecks to date. But she’s walked away from both. Given the nature of the sport, “people sometimes raise eyebrows about my age,” she says. But as a woman used to going full throttle on everything she does, she’s more than held her own, with the support of family, friends and the racing community. 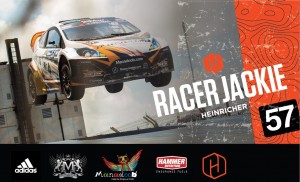 After experiencing the emotional bumps and bruises of a corporate transition that led to her departure from Boo-Shoot, auto racing became a new passion. She completed the AIG Drive Academy and her racing team encouraged her to dive into more training and get ready to race. From subsequent training, to Ferrari and then GRC, Heinricher has met a few other female drivers, all young and talented, but overall that’s not something she’s thought a lot about. So many of her fellow drivers are “famous athletes and incredibly talented,” so Heinricher focuses on the experience more than anything else. Jackie Heinricher and teammate Harry Cheung are aided by the management of legendary performance driver Rhys Millen.

Before racing professionally, Heinricher met the founders of Manadoob, an internationally acclaimed self-esteem program for successful childhood development. She went through their workbook, still reconciling the turmoil she endured professionally, and immediately knew she wanted to get involved. Today, in addition to being a professional racer, Heinricher is the first global ambassador for Manadoob. The organization’s logo is front and center on her race car and her helmet always comes with her as she travels around the world talking to kids about bullying and self-esteem. Racing gives Heinricher a pathway to meet with companies, sponsors, drivers and fans to raise awareness about Manadoob.

One of the most surprising parts of being a global ambassador for Manadoob is the number of adults who have come to talk to her about very personal experiences, as children and adults, but also the experiences of their children. The most inspirational stories are from Heinricher’s fellow GRC drivers, accomplished athletes who help give a voice to others. Jackie’s recent interview of fellow GRC racer and X-Game medalist Bucky Lasek about bullying was just published on YouTube.

Heinricher has three main goals this year in GRC: find the podium, bring awareness to Manadoob, and improve as a racer and human being. But just a few years after leaving Boo-Shoot Gardens, Heinricher is ready to “drive science again” as well. Through innovative research and development, Heinricher grew the company from a garage-based start-up to a multimillion dollar enterprise over the course of 15 years. Though still learning and growing from her experience at Boo-Shoot, it won’t be long before Heinricher, the self-described “irrational optimist,” is thinking ahead to new possibilities in science.

Heinricher’s confidence and resiliency go back to her time at The Evergreen State College. She notes that it “never occurred to me that I had such a great time at Evergreen – It’s where I learned to think and open up.” Above all, Heinricher credits Evergreen with creating a space for “personal growth without being told to do it. If I had gone to another school, I’m not sure I would have realized my own self-worth and potential.” To this day, many faculty members, who imparted unparalleled trust in Heinricher, remain personal friends and mentors.

Whether on the race track, as a driver of science and innovation, or as a social philanthropist, you can count on Jackie Heinricher to be a leader.