These had all been possibilities. That is, until one Board of Trustees meeting exactly fifty years ago, on January 24, 1968, decided our fate. Until then, our school was referenced to as “The New Four Year College” by the Board of Trustees, at least in their meeting minutes. Also written in the minutes were all the potential names for Evergreen:

The first order of business was the choice of a name for the college. In addition to the four names reserved at the last meeting (Olympia State, Evergreen State, Washington State at Olympia and Capital State), eight new names were presented:

Mr. Saunders moved, seconded by Mr. Halvorson, that “The
Evergreen State College” be the name. Carried. 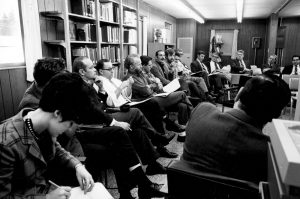 People gather to discuss the future of Evergreen in its early days.