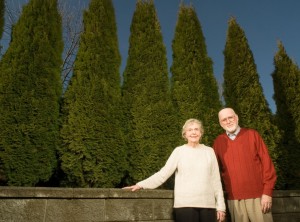 Barbara and Charles McCann are photographed at their home in Tumwater, Washington, on Tuesday, January 15, 2008.

On Wednesday, July 8, founding president of The Evergreen State College Charles McCann passed away at his home in Olympia. He was 89 years old.

McCann was appointed to the Evergreen presidency by the college’s Board of Trustees in 1968 after the Washington State Legislature passed a bill in 1967 authorizing the college. He served as Evergreen’s president until 1977, when he stepped down to join the faculty and turn over the presidency to former Washington Governor, Daniel J. Evans. McCann continued to be involved with Evergreen after he retired from the faculty in 1991, teaching classes and establishing an endowed scholarship at the college, the Barbara and Charles McCann Scholarship.

Prior to working at Evergreen, McCann earned a Ph.D. in English from Yale University. He first joined the faculty at Central Washington State College (now Central Washington University) in 1956, where he progressed from an associate professorship to chairman of the Department of English. He became assistant to the president in 1965 and later, Dean of Faculty.Credited with leading the design of Evergreen’s unique educational model, McCann also hired founding faculty, oversaw the campus’ construction, opened the campus and graduated the first class of 21 students. Under his watch, Evergreen achieved accreditation one year ahead of schedule.

According to Evergreen’s Board of Trustees’ chair Fred Goldberg, who knew McCann from the time he took the lead to establish the college, “he had a wonderful sense of humor and he never veered from his goal.”

In 1996, McCann received an honorary Masters of Public Administration from Evergreen. In the faculty petition for the degree, S.R. (Rudy) Martin, Ph.D., described McCann as a visionary. “He specifically articulated his vision of what the college would become…” Martin went on to write, “During the McCann presidency, Evergreen became… a widely acknowledged leader in American innovative higher education.”

Tom Anderson, a graduate of Evergreen’s very first class, who now sits on the college Foundation’s Board of Governors, remembers McCann’s early years. “We would have potlucks (in the dorms) and it was not uncommon for Charlie to drop by for dinner. He was one of the most accessible ‘executives’ I ever met. To a 20 year old in 1971, he was talking my language.”

Washington State governor Jay Inslee made a statement on the passing of McCann. “Washington State lost an education pioneer with the passing of Charles McCann, the founding president of The Evergreen State College. Mr. McCann helped us all imagine a different sort of college that would allow students to learn in a new way. Evergreen likes to say that Geoducks do things a little bit better, or smarter, or just differently. They do. And that stems in large part from Mr. McCann’s vision of a place in the woods where a diverse faculty would teach diverse students through interdisciplinary, collaborative and team-taught programs. Trudi and I join Greeners everywhere in sending our condolences to Mr. McCann’s family and friends.”

The college will raise a black flag as a sign of respect and mourning.

A private service is planned by his family.

Links from the Evergreen Archives

This link will have the first year catalog’s message to students from President McCann in it at the beginning.  If you go to the same page where this link originates you can also get the other six catalogs and the President’s messages for each of the years that Charlie was president.

McCann’s Capital City Press Club speech on student unrest.  On the same page where this link is found are links to McCann’s Presidential correspondence indexes (though there are problems with the presentation, evidently glitches in the OCR when they were originally scanned).