Before Orientation Week, a group of about fifty new freshmen arrive on campus ahead of their classmates to participate in leadership, conflict resolution, and community service activities in a program called the Evergreen Student Civic Engagement Institute, or ESCEI. The fifth annual class of ESCEI students came through recently to commence the new school year. 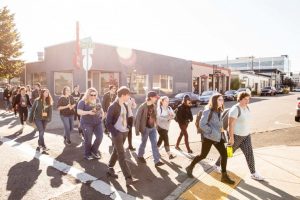 Students in this program commit to assigned reading, radio listenings, volunteer activities, workshops, performances and field trips to prepare for their education at Evergreen. Alumni play a major role throughout the week as they lead students through workshops and local tours.

For example, Laura Coghlan ’94 MPA ’11 and Amadou Ba ’06 MPA ’08, two researchers at Evergreen, led a workshop on thinking critically about statistics called Talk Data to Me!, “We hoped to help ESCEI students… to examine the different ways data can be used/misused to support a claim,” says Ba. “ESCEI is important to new students because it gives them a good base as they are designing and thinking critically about their education at Evergreen. We were very delighted to see the students engage critically with data during the workshop.” 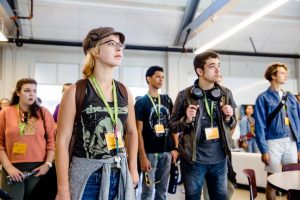 In addition, Ellen Shortt Sanchez ’92, director of Evergreen’s Center for Community Based Learning and Action (CCBLA), worked with the nonprofit Books to Prisoners to organize a volunteer session sending literature to under-served incarcerated people. Evergreen’s mental health therapist Jamyang Tsultrim ’92 helped lead a lesson on self-care through a shinrin yoku, a meditative walk through Evergreen’s forest. Delbert Miller ’96 led teachings and stories as an elder and spiritual leader of the Skokomish Tribe.

The institute was inspired by Evergreen Trustee and donor Fred Goldberg, who felt strongly that civic engagement and civil dialogue should be integral aspects of a college education. ESCEI was launched in 2013, thanks to Goldberg’s generosity. The institute gives students alternate paradigms to the often-polarized and frustrating levels of American discourse.

Students depart the institute ready to deeply engage with their education and their community. As a matter of fact, the requirements include carrying out a community service project of their choice into Fall Quarter. This could be a continuation of volunteer work started during the week or other work that students are passionate about; done in groups or individually.

The group reunites in November to share projects and reflect. If all coursework is completed and satisfactory, participants receive two credits. The first of many!