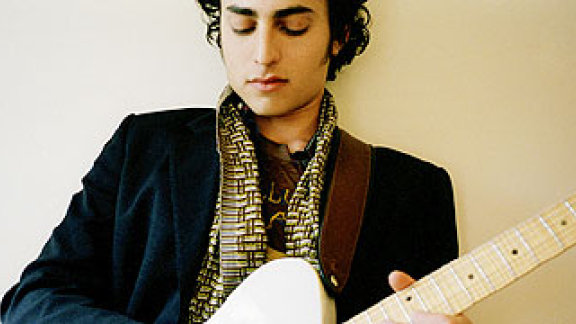 Keaton Simons fell in love with the guitar at age 12. He came to Evergreen when he was 17.  This spring he released a new album. And stuff happened in between.  Read a fuller biography posted on-line at last.fm.com. Here is an excerpt:

As a 17 year old out of high school, Keaton started thinking about college. He decided on The Evergreen State College, located in Olympia, Washington. The area, which has become known as a fertile breeding ground for music and art, proved perfect to set in motion his initiation into the immense world of music. It was there that Keaton started writing songs. He dove in headfirst, taking on courses ranging from 20th century classical composition to Indonesian gamelan music to jazz and quite a lot in between. Keaton’s years at Evergreen not only introduced him to diverse global music but also taught him to incorporate everything into his own sensibilities. Major record labels have accused Keaton of being too diverse to contain.

Read the full article, have a listen, and share your own stories of making and learning about music at Evergreen.

Galerie Fotoland is thrilled to present our first ever photography competition for Evergreen students.  We invite you to come see this eclectic and dynamic collection of photographs on display in the first floor lobby of the Daniel J. Evans Library building (right outside Photoland). 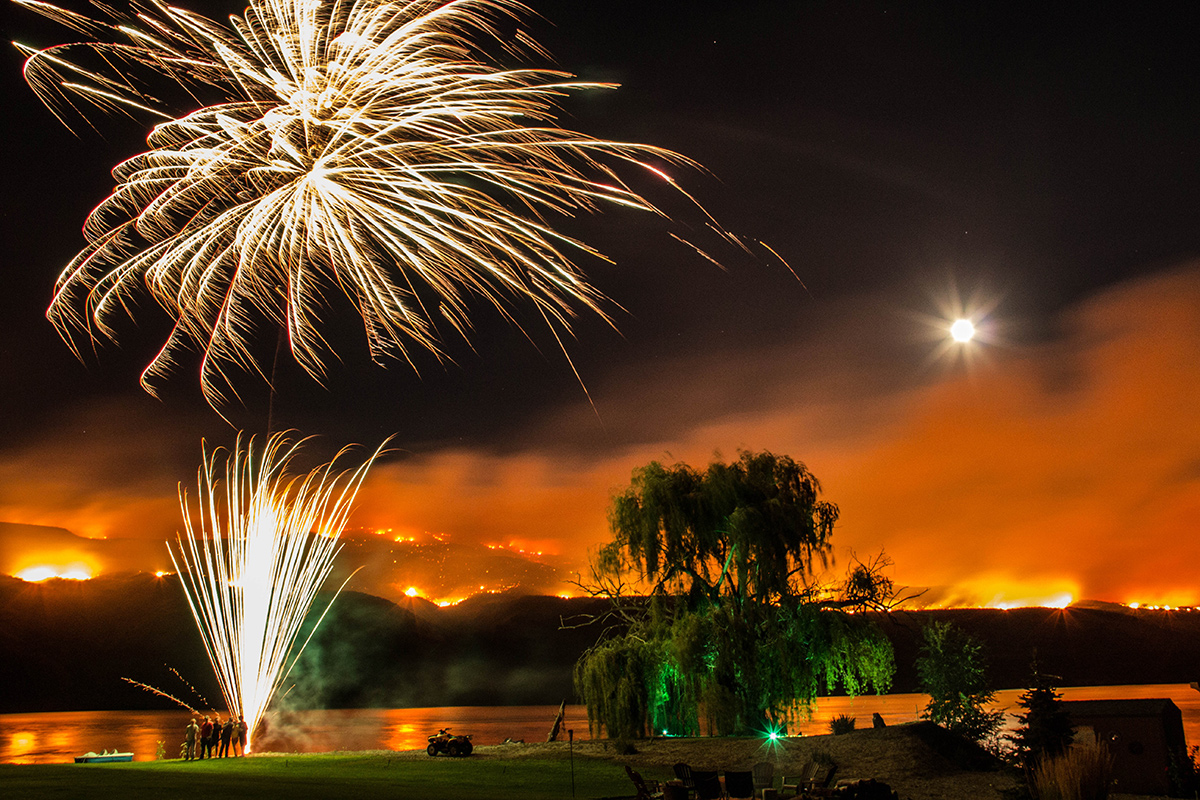 This photograph by George Silver was awarded first place. It was created in the Beginning Digital Photography class in Summer 2012.

The exhibition, sponsored by Photoland and the Daniel J. Evans Library, was curated and juried by four of Photoland’s student interns: Race Dillon, Emily Hoppe, Kathleen Moloney, and Emma Tronier.  They asked current Evergreen students to submit their best work and they received enthusiastic responses.  The exhibit includes 28 pieces created by 21 student artists who used a verity of photographic processes including both darkroom and digital work. 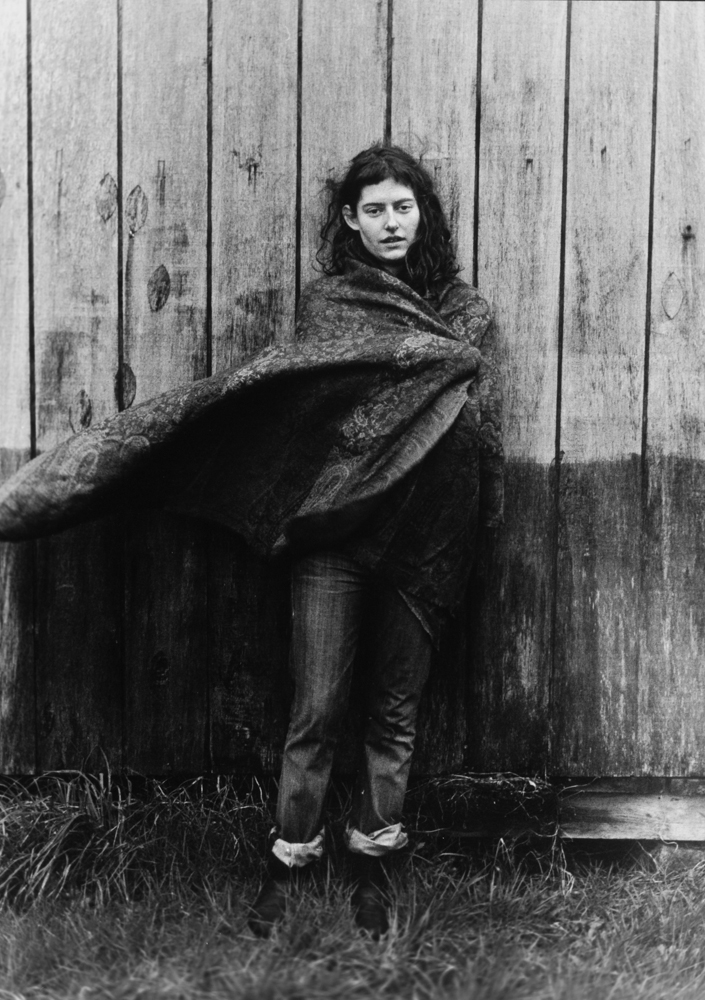 Congratulations to George Silver who received first place, and a $100 gift certificate; Lily Smith, second place and a $75 gift certificate, and Andrew Chard, Dakota Barnard, and Stacie Feldman whose collaborative piece received the third place prize and a $50 gift certificate.  We’d also like to give a big thanks to everyone who submitted work to the show! 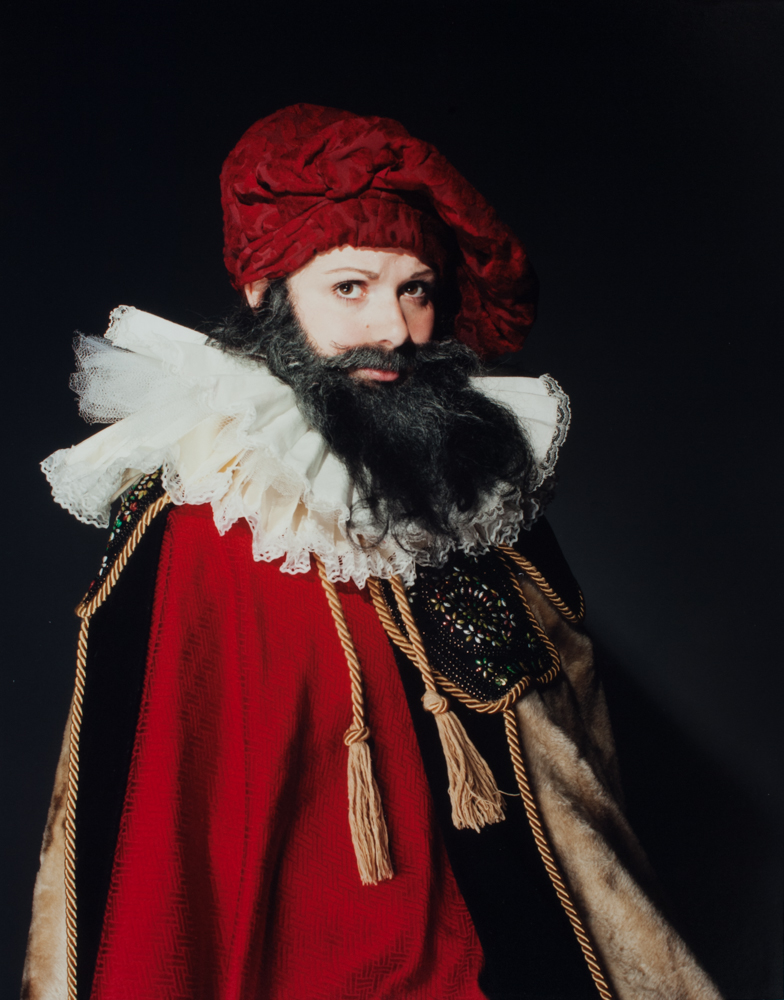 The third place photograph, created by Andrew Chard, Dakota Barnard, and Stacie Feldman in the Color and Lighting class, Winter 2013.

Come stop by Galerie Fotoland to see the rest of the show! 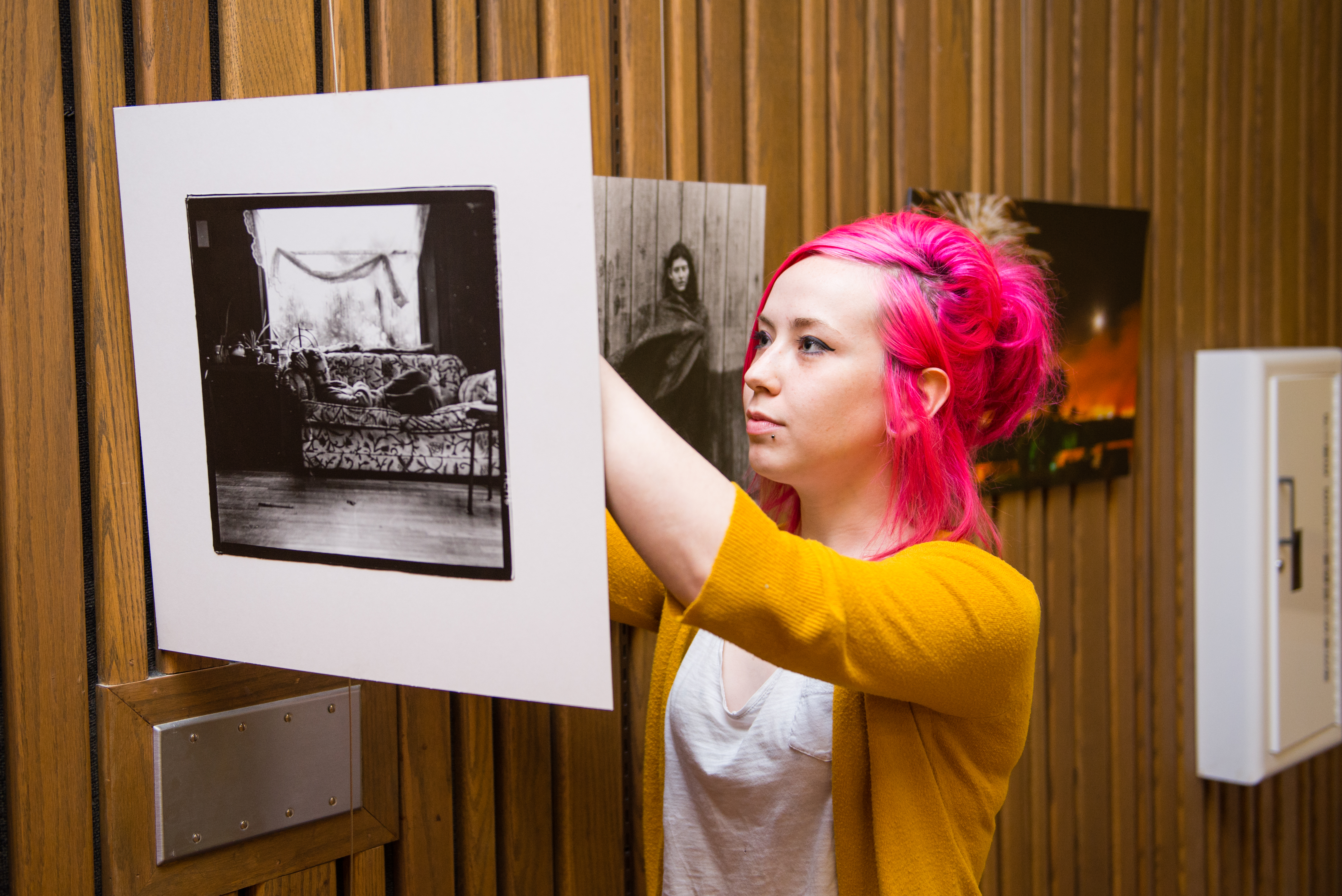 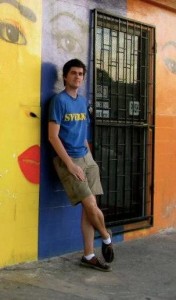 When enrolled in Caribbean Cultural Crossings in 2010 for my first quarter at Evergreen, I never imagined two and half years later I would find myself in the bustling Caribbean metropolis of Port-of-Spain, Trinidad.  In Caribbean Cultural Crossings, we explored the region’s literature, history, film, biodiversity, music, and art. Additionally, we learned and applied political economy and post-colonial theory to further understand the Caribbean.

In the end, the program did shape the future of my academic career; not only did it expose me to new subjects, but the program and the community within it gave me the confidence to actually pursue my interests in such subjects.  It was toward the end of Caribbean Cultural Crossings that, for my final project, I dissected the nutritional benefits, cultural influences, and historical factors that shaped the dish Jamaican Jerk Chicken.

Coming from a traditional boarding school background where I couldn’t have explored the subjects I was truly interested in, I found myself constantly asking: “Can I get credit for this?”  At Evergreen, the answer was, of course, yes. 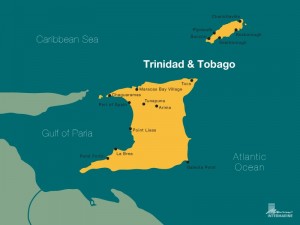 Trinidad – As I shuffle through crowded markets, converse with street vendors, and try my hand at making a variety Trinidadian dishes, I can clearly see the seeds of my interests in that program.  My studies here in Trinidad, through the 2012-2013 year-long program America Abroad, I have focused on the history and culture surrounding food and its related nutritional value.
this is of particular importance  in the light of a massive increase in international fast-food franchises establishing themselves in the region juxtaposed with a political movement in Trinidad seeking self-sufficiency in domestic food production.  Globally, we see massive changes in the way food is produced and consumed. Trinidad is no less influenced by this trend than any other nation.  So what does this mean for a nation that is only slightly larger than Rhode Island, and how can this serve as a model for the future of the rest of the world?  Though I am only halfway through my project as I write, I am seeing a mix of interesting, frightening, and hopeful signs along the way.
Easy as it would be to reflect on my experiences as a result of my own doing, I wouldn’t  be here without the support of the greater Evergreen community.  Last year, I received the 2012-2013 Jessica Kelso Memorial Scholarship, an award supporting international study.  This is a constant reminder of why it is easy to get so incredibly excited by Evergreen. We do not just talk about the importance of involving imagination, creativity, and innovation in and outside of the classroom; the students, faculty, staff, alumni, and members of the greater Evergreen community are given opportunities to live it every day.  No other institution in the United States (dare I say the world?) does things quite like we do.  When I share the concept of Evergreen here in Trinidad, the most common responses are either a) “That’s so cool!” or b) “Wow that makes a lot of sense.”  Because of the encouragement and support Evergreen has provided me academically, emotionally, and financially I feel that I stand among a community of people who are shaping the world for the better.  We are more than just a school in my mind: we are the embodiment of an idea, a vision of what we are all capable of achieving when we move together.

All the best,
Karl 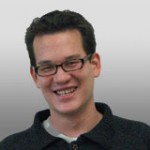 The paper finds a series of data flaws and unsupportable statistical techniques in an influential paper, Growth in a time of Debt, that has been used as factual proof for the necessity of Austerity cuts.

Since publishing their paper, the story has circulated all over the web. Thomas will talk on the Colbert Report this coming Tuesday.

In addition UMass has gathered all of the international attention of this story into one blog post here. 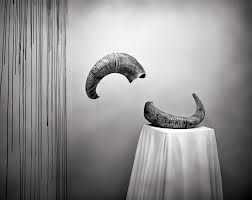 From April 2 to April 27th PDX Contemporary Art is exhibiting the work of Amjad Faur, newly hired Evergreen faculty member with a knack for photography.

“This work is meant to visually explore the dynamic relationships between representations and fantasies of the Middle East in Western art history and the the visual forms those fantasies take in contemporary visual discourse. I am honored to share this show with two extraordinary photographers: Evan LaLonde and the great Masao Yamamoto,” says Amjad.

More of Amjad’s work can be found at his website AmjadFaur.com 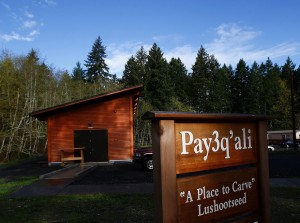 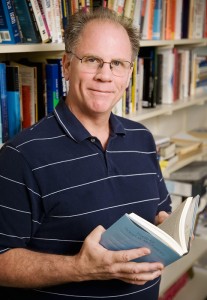 Last week Robert McChesney ’77 was invited on Democracy Now to explore the shifting landscape of the internet. Currently, he is a professor at the University of Illinois focusing on the history and political economy of communication, specifically the role media play in democratic and capitalist societies. Additionally, he is the co-founder of Free Press, a national media reform organization, that just hosted the National Conference on Media Reform. You can learn more about McChesney here. 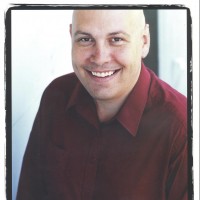 The Brotherhood of Olympus author and illustrator, Guy T. Simpson, Jr. ’05 will be appearing at Olympic Cards and Comics to do a book signing, make some limited edition prints of chapter illustrations available, and talk about the book and what is next for the saga.

The event will help kick off the new Young Adult book section in Olympic Cards and Comics.

We are pleased to announce the opening of a satellite location of the Thurston County Food Bank (TCFB) beginning Tuesday, April 9, from 4 to 6 pm in the Center for Community-Based Learning and Action (CCBLA) in Seminar II 2115.  This program is also being sponsored by the Division of Student Affairs and the Campus Food Coalition which is a student organization.

Members of the college community and residents of Thurston County will be able to obtain one bag of non-perishable basic food items intended to provide one week of assistance (vegetarian bags will be available by request) on Tuesdays from 4 to 6 pm in the CCBLA.  Individuals accessing this service will be asked to complete an intake form and provide identification if possible. Those who complete an intake form at Evergreen or another location of the TCFB are eligible for the service 15 times during the year from the Evergreen Satellite or any other location of the TCFB.  The impact of the Evergreen Satellite will be assessed toward the end of spring quarter in order to determine summer and fall continuation.

The Campus Food Pantry located in Police Services will continue to be open 24 hours a day, seven days a week. The Pantry will provide one or two items for immediate need.  Identification is not necessary to obtain items from the Pantry. END_OF_DOCUMENT_TOKEN_TO_BE_REPLACED 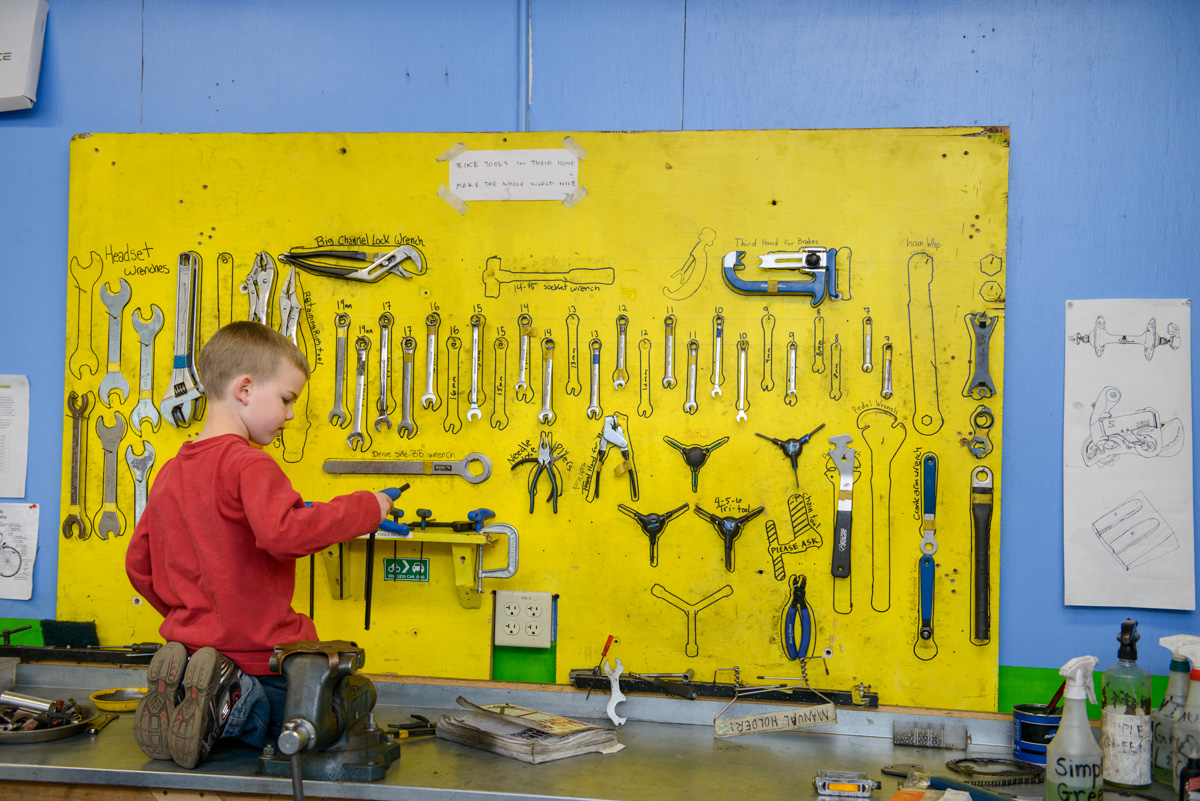 A young boy familiarizes himself with the tools at the bike shop on Tuesday. He and his dad stopped by to get his bike in working order for family trail rides. — Shauna Bittle photo

Over the past couple of weeks, spring in Olympia has felt like, well, spring anywhere else. We’ve been treated to cherry blossoms, blue skies and warm temperatures–and when it’s this nice, there’s just one thing to do: get outside!

The volunteers at the Evergreen Bike Shop have been doing their part by helping visitors get their bicycles (literally) in gear. They are well-stocked with tools and bike stands, and have a number of miscellaneous parts free for those in need. In true Greener fashion, they don’t do repairs on order; but are on-site to help riders figure out how to do their own repairs, and to lend a helping hand.

If you need some help getting your bicycle back on its wheels, stop by and see them. Hours are posted on the door. 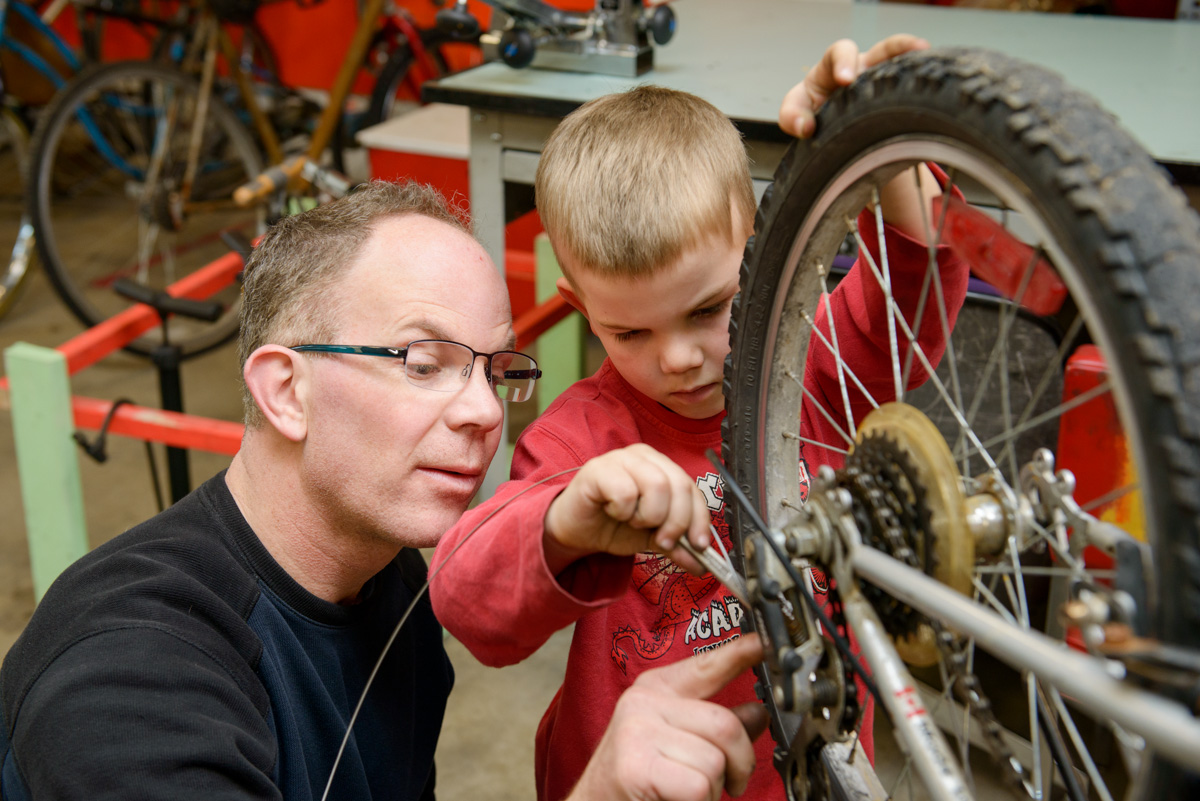 A father and son stop by to replace a brake cable and adjust the gears on the boy’s bike. The Bike Shop is open to members of the broader community in addition to Evergreen students and staff. — Shauna Bittle photo 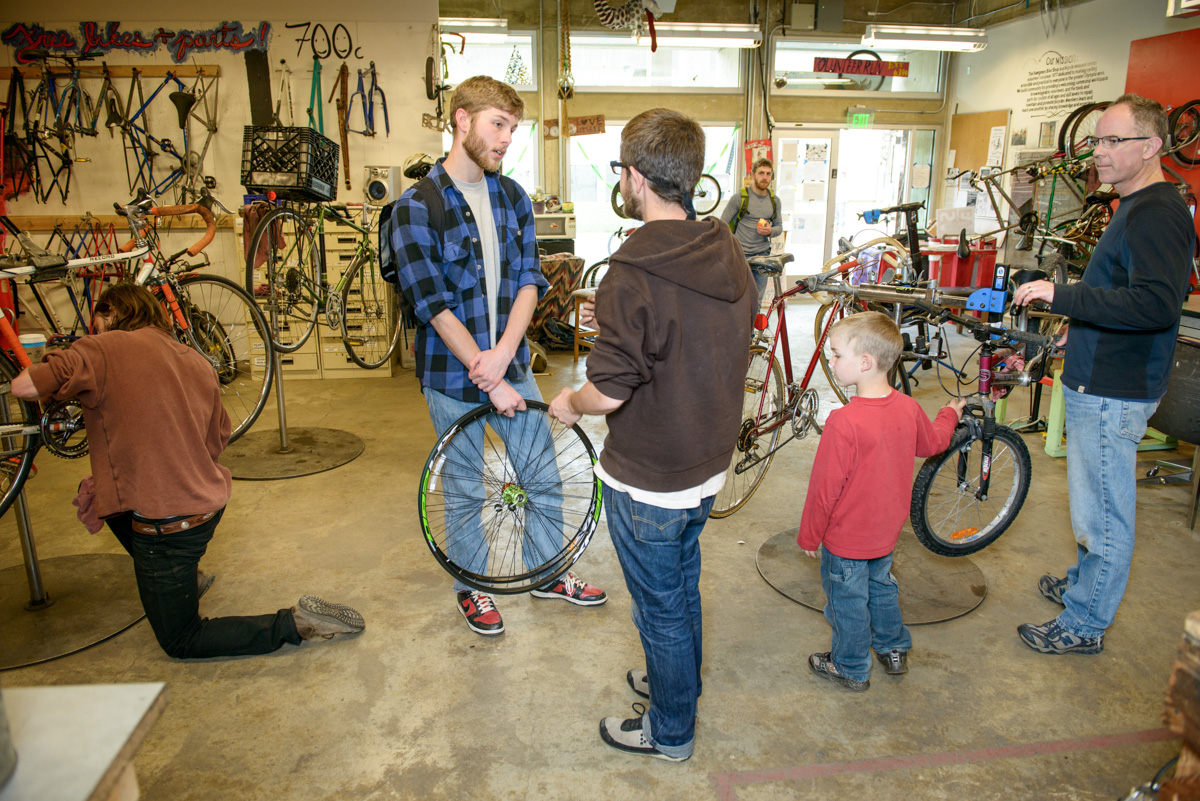 An Evergreen student stops by to adjust his seat and ask about the available parts at the Bike Shop. — Shauna Bittle photo 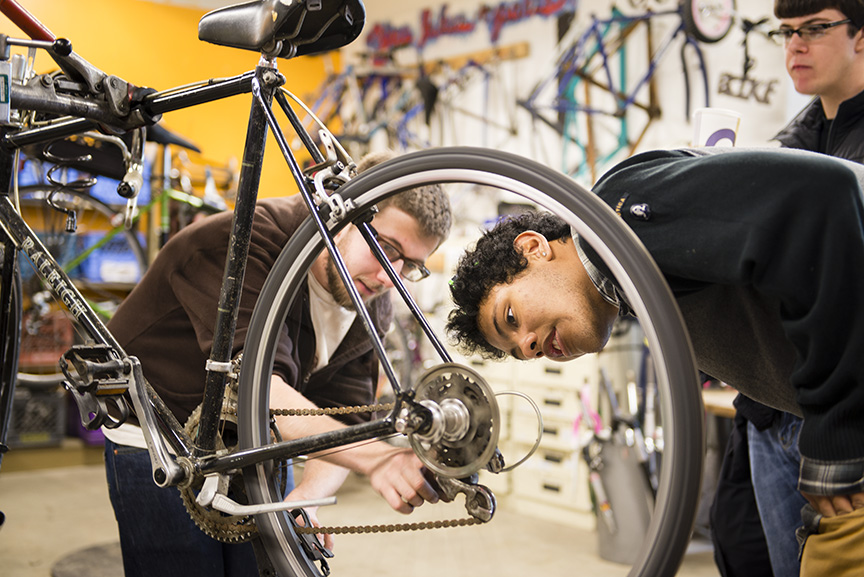 A volunteer helps a student figure out the cause of his bike’s slipping gears at the Evergreen Bike Shop. — Andrew Jeffers photo