How are the marine environments of the Pacific Northwest affected by climate change? What changes have been observed? What effects can we anticipate?

Community Shifts in the Rocky Intertidal

Many things we humans do in our everyday lives produce carbon dioxide. Although there are many natural sources of atmospheric carbon dioxide, the geologically recent 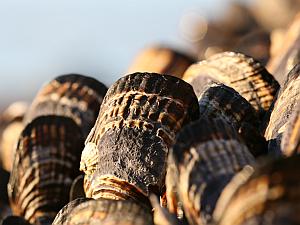 This intertidal mussel may diminish on our coastlines as the ocean becomes more acidic.

increase in carbon dioxide is in large part due to human activity. The combustion of fossil fuels to produce electricity and transportation are a couple of the main sources of carbon dioxide emissions.

The ocean has absorbed about one-third of all human-induced carbon dioxide and as atmospheric carbon dioxide levels increase, the ocean’s absorption of the greenhouse gas does as well. As the ocean absorbs carbon dioxide in rapidly increasing amounts, marine environments become more acidic.

But what does this mean exactly? In order to maintain chemical equilibrium in the sea, some of the absorbed carbon dioxide reacts with water to produce carbonic acid. This succeeds in disassociating to leave a greater than average hydrogen ion concentration in the ocean, in turn decreasing the pH and thus the making acidity greater.

The average person may not know exactly the link between car exhaust, increasing concentration of hydrogen ions, and the implications this may have on the seemingly distant marine world.

But recent studies show that increasing human-induced carbon dioxide emissions have adverse effects on marine animals, which naturally includes those organisms that depend on them, like humans!

Many marine organisms depend on calcium carbonate to build their protective 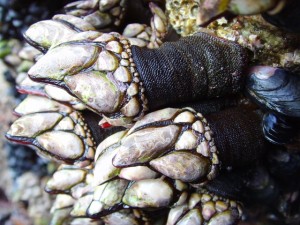 Goose barnacles become displaced by other organisms when the pH of the water spans a lower range.

structures. In order for many animals to develop and maintain their shells, a slightly non-acidic environment is required. Many habitat-forming and food-providing marine animals are dependent on their shells, which are known to become difficult to form and have the potential to dissolve in conditions that are more acidic than normal.

One of the first long-term datasets studying ocean acidification and ecological dynamics at temperate latitudes recently found a strong link between species interactions and pH  levels. Researchers studied the ecological impacts of increasing acidity in coastal Washington State. They found that waters are becoming more acidic in association with increasing absorption of atmospheric carbon dioxide. The increasing acidity in this 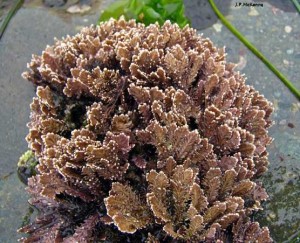 region is causing organisms that depend on their shells to become more vulnerable. Shelled animals were found to decrease in abundance while simultaneously being replaced by non-shelled animals as acidity increased over time.

The results aren’t as linear as they appear, however. In general, dominant calcareous species, like the giant california mussel, were found to be negatively affected by increasing acidity, while subdominant barnacle and coralline algae species increased. Shifts in species abundances imply major ecosystem alterations. Dominant mussels in this region provide structure and food for a great diversity of organisms in the community in addition to contributing to filtering activities important in nutrient recycling pathways.

Understanding the complexity of ecosystems and their responses to the rapidly changing climate requires detailed observation of all related variables. Nevertheless, there remains a potential for great shifts in ecosystems vulnerable to ocean acidification worldwide.

The study location, Tatoosh Island, is a large upwelling zone, where dense, cool, nutrient-rich water flows to the surface. Upwelling increasing during summer months here. Due to the temperature differences in the air above the ocean surface, wind blows surface water offshore. The result of all this is the surfacing of deep-water respiratory carbon dioxide and thus a decrease in pH. These factors make upwelling zones inherently amplify the effects of changes in ocean chemistry. The fact that other regions of the ocean do not have this additional carbon dioxide flux potentially makes such regions more susceptible to ocean acidification and thus important regions to examine in the rising fluctuation of ocean chemistry.

Shellfish and Effects of Acidification

Ocean acidification is a chemical reaction that occurs in which carbon is absorbed by the ocean and has an effect that can be observed on a global scale. It is important to think about the stresses this change influences on our biota. Most shellfish we find while beachcombing may seem tough and callus to the touch but not all species are as hearty as we might presume.  In a recent study, select shellfish species were grown in a controlled environment under conditions to simulate ocean acidification stresses. The results of this study are both interesting and informative. 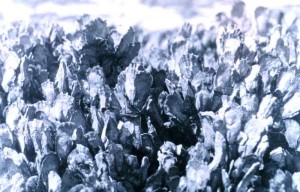 Suminoe oyster larvae appear to be resistant to the corrosive effects of acidification from increased carbon dioxide.

The two species studied are both oysters, the Eastern oyster (Crassostrea virginica) and the Suminoe oyster (Crassostrea ariakensis). Both oysters perform a process called biomineralization, this is when an organism uses minerals in it’s environment to create or harden tissue to build and grow it’s shell. Oysters begin life as larvae and are more sensitive to environmental conditions and stresses. At the Smithsonian Environmental Research Center in Edgewater, MD the two species of oyster larvae were grown and observed for about a month in controlled conditions. The variable which is the focus of this study represents the amount of carbon in the ocean during four different time periods. The first simulated time period is before the industrial revolution (~1760), the second is present day. The third is a future projection if carbon emissions follow the current trend, which translates to the year 2050. The fourth is also a future projection and translates to the year 2100.

After observing both the Eastern oyster and the Suminoe oyster scientists discovered the two species reacted very differently from each other even though their environmental conditions were the same. The Eastern oyster had an increasingly difficult time building it’s shell as the acidification effects increase. The Suminoe oyster does not react in the same manner, it is able to build it’s shell even with the increased effects of acidification.

We can learn a few things from the results of this study:

It is important to understand the environmental changes occurring today and learn how these changes affect not only specific species but the entire food web. This study was conducted in MD but the results can be applied to shellfish of the Pacific Northwest as well.