The Basics of Acidification: Not so basic after all

Coral reefs are admired worldwide for their impressive diversity of life and other-worldly beauty, yet few people understand the threats that coral reefs face in a rapidly 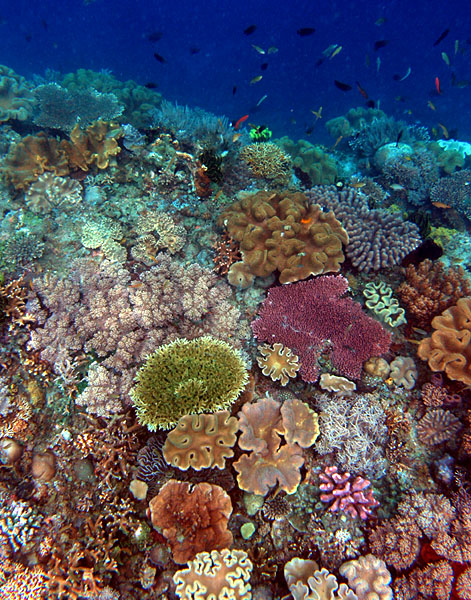 Coral reefs are hotspots of biodiversity but are threatened by decreasing pH of the ocean.

changing climate. And while a mere tenth of a percent of the world’s ocean is covered by coral, over a fifth of marine species inhabit their reefs, and more than 250 million people depend on reefs for their livelihood. Given that crucial role, current predictions of coral reef survival by the year 2050 are certainly cause for alarm. One of the major threats to coral reefs, ocean acidification, has come to the forefront of the scientific community only in the last few decades, with the number of published papers concerning acidification skyrocketing in recent years. One such paper, The Basics of Acidification: baseline variability of pH on Australian coral reefs by Depcynski, Gagliano, McCormick, and Moore, illustrates that the effects of acidification on various reef organisms will vary, and suggests that adaptation may be more likely for some marine species than others.

The paper first outlines how ocean acidification occurs, informing the reader’s understanding of the subsequent material. When atmospheric C02 interacts with seawater it produces carbonic acid, releasing hydrogen ions and disrupting the balance of carbonate and bicarbonate. Calcifying organisms like coral need forms of calcium carbonate such as aragonite, so this imbalance can diminish their ability to grow, and can even break down existing skeletal structures. Acidity is measured on the pH scale, which measures the concentration of hydrogen ions in water and is logarithmic in value. This is to say that a value difference of one, say, from 8 to 7 on the scale, would represent an exponential decrease in hydrogen ions and an exponentially higher acidity. Projections for the year 2050 are close to 25% decreases of pH, a change that would be catastrophic for reefs and their inhabitants.

But although the ocean is consistently acidifying, there will certainly be variability not only on a regional level, but also within ecosystems and microhabitats. This fact was established by Gagliano et al through examination of water samples from various microhabitats within different sampling sites, two on the Great Barrier Reef and one on Ningaloo reef in W. Australia. These samples were taken from specific microhabitats, including between filaments of algal beds, inside goby holes, within branches of staghorn coral, as well as subsurface, reef top and bottom, open sand, etc. Within one reef system there was variability of over .1 pH units, and between W. Australia and the Great Barrier Reef there was as much as .4 pH units difference. The study also included a 48-hour study of pH in an attempt to establish a diel or daily pattern, but the data was inconclusive.

While the study had some methodological inconsistencies, i.e. sampling for only two days to find a daily pattern and also sampling different reefs during different seasons, it succeeded in demonstrating the highly variable nature of pH among reef systems. The authors pointed out that in general, motile organisms will be regularly subjected to a greater range of pH than will sessile organisms. Also, factors such as rates of respiration and/or photosynthesis, degree of tidal flushing, and amount of terrigenous runoff were thought to have effected the experimental outcomes. The article concludes that future studies concerning pH, especially among coral reefs, will glean more accurate data if baseline variability of acidity is factored in. What is implied though not explicitly stated is the potential for some organisms to be more resilient to declining pH. So while the inevitability of coral catastrophe is called into question, one thing remains certain: we may not know just what the future will look like, but it will undoubtedly be vastly different from the world we know.

Mangroves and Sediment: How a Simple Process Could Help Protect Coasts from Sea Level Rise

Think about dirt. It doesn’t seem that exciting, from an outsider’s perspective, but

understanding the processes involved in its buildup and the environments it affects is extremely important for understanding the world as a whole. One environment with particularly interesting effects on sediments is the mangrove forest, a productive ecosystem which acts as a buffer between land and sea and which traps sediment and causes it to accrete (build up). Mangrove trees are one of the few salt-tolerant species 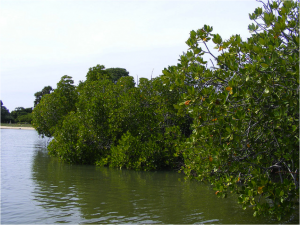 of plants, allowing them to grow on coastlines which are regularly flooded by tides. They have a thick system of pneumatophores (aerial roots which are used to obtain extra oxygen) and prop roots. This root system causes water currents to slow under the trees, which allows the sediment being carried by the water to settle out and build up in thick layers.

Many studies have been done on the effects of mangrove trees on the rate of sediment accretion and other relevant processes, but most of these studies have focused on wild mangrove forests. In the study “High mangrove density enhances surface accretion, surface elevation change, and tree survival in coastal areas susceptible to sea-level rise,” a group of researchers from varied backgrounds set out to test how the population density of planted mangrove trees affected factors such as the rate of sediment accretion, the rate of surface elevation change, the amount of nitrogen in the soil, the aboveground biomass around the trees, and the survival and growth of the trees themselves. Besides just simple curiosity, the group had an ulterior motive in studying these variables. By accreting sediment, mangroves may help slow the effects of sea level rise in certain areas. Creating thick mangrove plantations near the coast may be a good way to accomplish this, but first it needed to be understood how many trees could be planted in one area and how this would affect sediment accretion and the trees’ survival.

The methods the scientists used in the study were fairly clever in some cases. They set up 15 different mangrove plots along Puttalam Lagoon, Sri Lanka, planting in population densities of either 6.96, 3.26, 1.93, 0.95, or 0 (an unplanted control) seedlings per 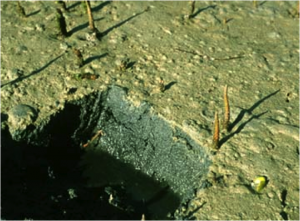 A thick layer of sediment builds up around mangrove roots

square meter and using the mangrove species Rhizophora mucronata (the red or loop-root mangrove). They measured five different parameters over a period of three years. For sediment accretion, they put down a layer of feldspar sand and simply measured the distance from this layer to the sediment surface. For elevation change, they planted two sediment pins in the ground which would be forced upwards as elevation increased (elevation increases in mangrove forests due to sediment accretion and the belowground growth and expansion of roots). For the concentration of nitrogen (an important nutrient), they took samples and used infrared mass spectrometry to measure the percentage of nitrogen in each sample (this is a method which measures the light given off by different atoms). The scientists also measured tree survival over time and tree growth (growth was measured using parameters like tree height, trunk diameter, and leaf area among others). Finally, the scientists measured the accumulation of biomass (once-living material) on the ground. This in particular was potentially difficult, as it would be invasive and destructive to the trees. However, the researchers decided to measure it indirectly by measuring the aboveground biomass and tree height of wild mangrove forests and developing an equation which described the relationship between the two parameters. In this way, they could measure the tree height of their planted trees (a non-destructive measurement) and use the equation to determine biomass. These careful and clever methods paid off, as they gathered some conclusive and significant data.

The group discovered that the rate of sediment accretion, elevation change, nutrient content, and biomass all increased in the more thickly planted locations. In addition, for the first three years of life it was found that the thicker plantings actually had higher survival rates than the thinner ones. This means that in the case of the red mangrove, thicker plantations could help enhance beneficial processes, at least while the trees were still young. There was no relationship found between tree density and tree growth (like height or number of leaves), meaning that in very young mangrove plantations population density does not affect growth.

Since the study found that both sediment accretion and biomass were higher with higher population density, it could therefore be useful to plant thick mangrove forests along coastlines both to locally help slow sea level rise and to act as storage sites for organic carbon (which would be stored in the biomass). Unfortunately, this particular study did not address the implications of such plantings or their usefulness in full. It seems likely that the scientists preferred to wait to pass judgment until more information is gathered. For example, it is still important to test how all of these factors change as the mangrove plantings age and begin crowding. For now, this study provides a helpful look into how mangroves—and dirt—can be used to protect against the effects of climate change.