Based on “The role of the thermohaline circulation in abrupt climate change” (Peter U. Clark et al., 2002)

The ocean covers over 70% of our planet’s surface and contains about 97% of the earth’s water. This massive body of water is an essential part of the earth’s climate. Thermohaline circulation is a part of this large system. It is mainly driven by temperature and freshwater inputs (which equates to changes in salinity.) These two factors determine the density of the water, which causes upwelling and sinking. This entire system causes a lot of mixing by transporting heat and matter, making it an important factor in the earth’s climate. Thermohaline circulation is also important because it brings nutrients up to surface waters, allowing the organisms there to use them for growth. Because thermohaline circulation is dependent on changes in temperature and salinity, climate change will directly affect it. Researchers say that if the planet continues to warm, a total collapse of this system is not unlikely. 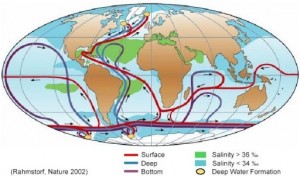 The pattern of deep ocean currents that is driven by gradients of seawater density.

Many people doubt these predictions of how the environment will change as a result of increases in greenhouse gasses. It is difficult for scientists to justify predictions, because most are based on models rather than actual data. However, a team of scientists looked at both models and real past data in order to compare and support the hypothesis that the thermohaline circulation system will collapse if increases of greenhouse gasses continue. In the article “The role of the thermohaline circulation in abrupt climate change” by Peter Clark et al., a team of scientists that specialize in either climate or geosciences, looked at data from past events where the climate had changed. They used models to standardize and compare this data, but also looked at specific parts of the data. They had to look at both because when they standardized the data, some of it was lost. Standardizing the data puts the focus more on the patterns rather than the actual data itself.

The data they presented was very difficult to understand. They did not explain their figures or what the data meant, so it was difficult for someone that is not a climate specialist to understand. Something they mentioned was that they used Beryllium (Be) data to “clean up” their Carbon14 (C14) data. Because Be and C14 are formed in the same way in the atmosphere, if there is an increase of Be there should be an increase of C14 as well.  Both Be and C14 can be affected by changes in the atmosphere such as solar flares, which cause an increase in radiation, or changes in the earth’s magnetic field. Because the scientists did not want to look at changes in that occurred in the atmosphere, and they were only interested in looking at atmosphere-ocean mixing, they used the Be data to get rid of some of the C14 data that was present. This way, they were able to get a more accurate reading of how much C14 occurred as a result of mixing rather than changes in the atmosphere.

The team compiled all the data they had and presented it, leaving the reader to make their own assumptions. This is weak point of this paper; it is not accessible at all. It seems the purpose of this paper is mostly to be used by other climate specialists to support their hypotheses. The paper provides the scientific reasoning behind these ideas. The authors wrote this with the audience of climate specialists in mind. They did not provide any discussion on the ramifications of ocean circulation stopping, but instead leave us to determine that for ourselves. I think that their main point was to provide evidence for others to cite and provide a scientific overview of the data that we do have on climate change, and what exactly happened in the past.

Oxygen minimum zones are expanding in our world’s tropical oceans. This can cause biological impacts and future questioning on how this can be prevented. An oxygen minimum zone, an area of low dissolved oxygen, can occur in depths of 200-1000 meters.

In the article called, “Ocean oxygen minimum expansions and their biological impacts,” by Stramma et. al., the researchers ran climate models over centuries to try to predict and show the expansions of the oxygen minimum zones under global warming conditions. The study took place during two time periods, 1960-1974 and 1990-2008. Combining all data sets and using statistical analysis they showed the areas of low dissolved oxygen. The lowest areas occurred nearest to the equater. They have concluded that the oxygen levels in the areas between 200-700 meters have declined in most regions of the tropical Pacific, Atlantic, and Indian oceans.

In the article the authors kept mentioning lack of data and didn’t fully explain why, or the large gap between data collected over the two time periods. In the abstract they mentioned that there are impacts on fisheries without really ever discussing the topic in the rest of the article. It was as if they were unsure about their own analysis of the topic or research as a whole. The authors mentioned how there are many other causes to the declines in the oxygen levels, it sounded as if they weren’t completely confident with their study.

I think that more research needs to be done with more recent data. They had a lot of data from the time period 1960-1974 and very little for the recent data.  I think it would be a more affective study if they had waited for more data in recent years before trying to prove that oxygen minimum zones are expanding due to climate change. 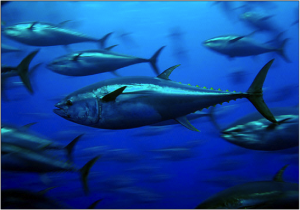 Compression of habitats for fish such as tuna and marlins will occur as oxygen minimum zones expand horizontally and vertically.

The study of the expansions of the oxygen minimum zones are important to preventing negative impacts on our oceans and the species in them. The zones of low oxygen are expanding both horizontally and vertically. This can cause problems for pelagic fish such as tuna, and marlin by compressing their habitat or expanding predator’s habitats. Low oxygen levels are not good for our oceans species, especially those who can’t migrate to an area of higher oxygen levels such as bottom dwellers and free-swimming organisms.  They end up dying in the hypoxic or low oxygen conditions. This could lead to even more dead zones than we already have. Leaving vast areas of no life in parts of the ocean.

The ocean temperatures are rising due to the changes in the atmospheric radioactive forcing caused by fossil-fuels burning and other human activities. They have taken and researched thousands of different test that people have done to check how much O2 concentration is in the ocean. The overall test results is that as global warming continues to happen, the increase in temperatures in the ocean, which means there is going to be a decrease in the O2 concentrations. It’s unclear why the O2 concentrations in the ocean are decreasing but some scientist believe that some possibilities could do with changes in ocean circulation rates, changes in preformed values, changing red-field ratios, and changes in biological production.

Two effects that the oxygen concentration has in the ocean is the reducing of nutrients from deeper waters of the ocean to be able to come up to the surface. This decreases photosynthesis production due to the biological pump. The second thing is stratification limits the downward transport of oxygen from well-oxygenated surface waters into intermediate waters.

Less oxygen affects plants, animals, and people. When the plants aren’t able to get the nutrients they need to create oxygen they start dying. This means there not creating as much oxygen for marine life to survive, which would have a huge impact of the millions of people that depend on marine life. As we continue to burn fossil-fuels and the temperature continues to increase, the less oxygen there is going to be in the ocean.