Crabs – first to invade, but will they be the last?
By Sylvia Gadberry

Based on “Climate Change and Invasibility of the Antarctic Benthos”  (Aronson et al., 2007)

The Antarctic is Antarctica and the Southern Ocean that surrounds the continent.  The ocean is very unique; in the shape of a circle around the land mass it has a current surrounding these waters that is the border of the cold Southern ocean against warmer waters.  This border is a physical barrier for many kinds of organisms living in the water, from the smallest floating creatures to large sharks. On the two sides of that ocean current and border, different animals thrive. 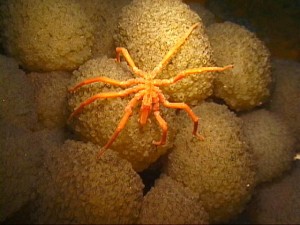 Pycnogonids (giant “sea spiders”) are among the Antarctic species that are vulnerable to warmer water invaders such as snow crabs and sharks.

The life in the Southern ocean, especially the life that is found on the bottom of the sea, the benthos, and close to the land mass, is very unique. The continental shelf, the area around the landmass submerged in water but still part of the continent, is deeper than that of the other continents.  That is related to the weight of the ice pushing down on the continental plate, and also with the sliding off these ice masses from the land into the water.  That itself causes some of the life forms that call this area home to be somewhat different, with relatives around the world found in deeper waters.

In the Antarctic, we find giant sea spiders not seen anywhere else.  These are creatures looking like a cross between a spider and a crab, but are neither. Long wormlike creatures called nemerteans prey on the life of these shelves. Large isopods, reminiscent of giant pill bugs, find their place in a, usually, crab and lobster free environment. What we do not see very much are the gastropods or snaillike animals, bivalves like scallops, and of course no crabs.  Crabs have a hard time keeping their circulation going in the cold waters.  But we also do not see fish that have the ability to crush down on a hard-shelled prey.  There are some fish, ice fish with antifreeze like proteins in their blood and the enigmatic liparids.  On an even larger scale the Antarctic is missing the walrus and gray whale to feed upon life on the bottom of the ocean.

In the absence of the duraphagous, bone crushing, crabs and fish, other creatures took that place in the ecosystem, for example the nemerteans, and life on the bottom of the shelf is denser in larger patches than anywhere else in the world.  Fields of strangely beautiful suspension feeders living on the seafloor catch their meals with arms or featherlike appendages reaching in the frigid water.  Sea squirts and sea stars are frequent sights.

The unique life of the Antarctic is similar only to the life of the Magellan region of South America, basically the part of South America closest to the Antarctic.  We understand that the supercontinent of Gondwana once had Antarctica combined with this landmass, and they separated around 60 million years ago, after the end of most dinosaurs.  Right before the time the continents split up, there was a lot of change in the oceans around the globe, what we now call the Mesozoic Marine Revolution.  Then global cooling affected the waters of Antarctica to the point that this revolution reversed itself, and until now the waters of the Southern ocean stayed reminiscent of the life before the Marine Revolution.

Until now, that is.  In 1986 a pair of Spider crabs (not Sea Spiders that belong here) where found in the Antarctic, probably having hitchhiked on a boat.  14 different species of King crab have been found now, and it is starting to look like they are not just invading, but potentially staying.  The effect this would have on an ecosystem that was fine-tuned to life without duraphagous (bone crushing) predators for all this time could be devastating.  Prey would not have defenses.  And if the crabs can make it, who else could cross the barrier into the Southern Oceans with all the oceans warming due to climate change?  Could the sharks get there soon?  Would the species that live their life in this unique environment perish with the warming, and the invaders will find themselves in a place of even better chances to make a spot where they have not belonged for so many millions of years?  What else can hitch a ride on one of our boats into this ecosystem?  If we lose one species, what happens to rest of them, will we look at a domino effect of extinction?

Maybe a few crabs at a remote and cold place most of us will never visit do not seem like a scary event, but science sees it as the warning it really is.  As our planet changes with the climate change caused by human pollution, the effects will be hard to predict and fundamental.

And the changes have begun.

As you may or may not have heard, it is true that sea ice in the Antarctic has been 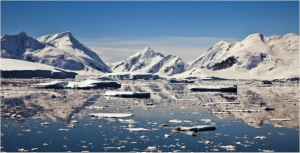 “Growing Horizon of Ice” Photo of Sea-ice in Antarctica, from National Geographic

expanding during the past few decades.  Here, the sea ice is growing at a rate of about 1.3% per year, while in most other areas around the world such as in the arctic; the sea ice is disappearing at a rate of about 0.6% per year.  This phenomenon has been subject to much attention from scientists around the world, as well as climate change deniers who look for quirks in the climate system as a way to prove their false claims.

This paradoxical phenomenon was thoroughly studied by a team of scientist working out of the Royal Netherlands Meteorological Institute.  What they found is not exactly as heartening as “sea ice expansion” sounds, but it is fascinating nonetheless. In short, this study presents observations indicating that melt water from Antactica’s ice shelves accumulate in a cool and fresh water surface layer, shielding the surface ocean from deeper waters that are melting the ice shelves from below.  With a relatively thick top layer of cool water, the sea ice around Antarctica is now increasing quite rapidly without the hindrance of warming water that is seen elsewhere in the ocean thanks to climate change.

There has indeed been previous research conducted, and several theories such as a negative sea-ice/ocean feedback loop and an intensification and southward migration of the Southern Ocean Westerlies have been presented in the past.  However, they do not entirely hold up and only explains about a quarter of what is being observed. 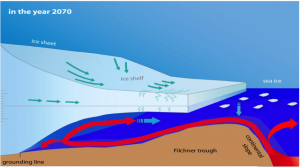 The team of scientists analyzed satellite data and buoy observations for how much salt was in the water, along with how warm it was for the period 1985 to 2010.  They then compared that data to the output of a coupled global climate model that simulated how losing 250 gigatones of melt water from the Antarctic ice sheet each year would effect conditions in the surrounding area. In the end, they found that losing that much meltwater did in fact lead to the recent growth in the amount of sea ice.  These trends being observed will likely continue to contribute to expanding sea ice and significantly reduced surface warming in the Southern Ocean for the approaching decades.  It should also be said that the link found between subsurface ocean warming (thanks to climate warming), ice-sheet mass loss by ice-shelf melt, and expanding sea ice may constitute a feedback that has the potential to oppose Southern Hemispheric atmospheric warming and amplify increases in global sea level.