The Effects of Sea Level Rise on Migratory shorebirds.

Global climate change due to increased carbon dioxide (CO2) emissions is expected to cause an increase in sea level rise due to thermal expansion and melting ice caps. Sea 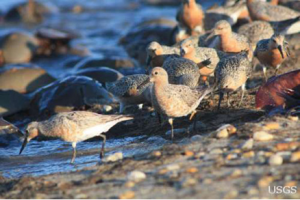 level rise will negatively affect many coastal areas and intertidal habitats, including important shorebird migration sites. Migrating shorebirds require extensive habitat to feed on marine invertebrates. As these habitats become less available, fewer bird populations will thrive due to lack of space and food resources. Sea level rise is expected to increase at different rates in different areas due to local geography, aquifer depletion, and development of these areas. In a study published in Waterbirds: The International Journal of Waterbird Biology, authors compiled and analyzed research to make projections on where sea level rise will have the greatest detrimental effects on shorebird habitat.

Five United States coastal sites were selected as study areas. These sites include: Willapa Bay, Humboldt Bay, and San Francisco Bay on the west coast, Bolivar flats in the Gulf of Mexico, and Delaware Bay on the east coast. Each of these sites is known to support a vast number of important migratory shorebird species. Sea level rise projection data was available at each site from the Environmental Protection Agency (EPA). This data allowed for the estimation of probabilistic sea level changes based on the historic changes that had been measured. These measurements were taken into account with the 50% and 5% sea level change estimates developed by the EPA and Intergovernmental Panel on Climate Change (IPCC). The 50% probability represents an increase of 2 degrees C warming, while the 5% projection represents a projected future sea level change with a 4.7 degrees C increase in temperature.

After deciphering through previous data, and mapping out future projections, the authors came to the conclusion that all five sites will likely show an increase in sea level rise, and therefore a decrease in shorebird habitat. This has important implications on the population numbers of shorebird species across the United States. This is especially alarming when considering that these numbers provided by the IPCC and EPA are conservative projections of temperature change, and out of date. This article was written in 2002, and the temperature change projections were made in 2001. We are exceeding these numbers at an alarming rate, and it is safe to say that the detrimental effects we are witnessing at these sites will only be exacerbated as CO2 emissions continue to increase.