The program Visualizing Microbial Seascapes: An Introduction to Animation and Marine Biology has a blog, https://sites.evergreen.edu/vms/, with posts featuring each student’s observations, research and drawn and animated representations of marine micro-organisms they’ve studied this quarter.

Both screenings absolutely free and open to the public

Here’s an article detailing the songwriting process on on Bob’s Burgers.

Exciting News! Devon Damonte will offer this intensive direct animation workshop again this coming summer. Click on the image below for details. 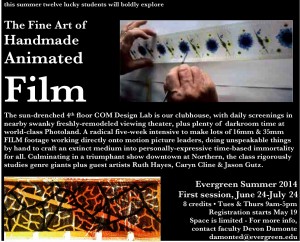 Here’s the description in the summer catalog.

Northern, The Olympia All Ages Project

Film Still from “In the Conservatory”

Students in the “Botany: Plants and People” class at The Evergreen State College produced handmade frames on 16mm film that were combined, digitized, extended and edited by their workshop teacher, filmmaker Caryn Cline. Caryn also created the soundtrack, working with a jazz song by Chuck Metcalf combined with the sounds of people at play, recorded in Riverside Park, New York City.

Film still from “Left Side, Riverside”

“Left Side, Riverside” (2011, .mov, 8 minutes)
An experimental document of the filmmaker’s experience of Riverside Park, on the left side of Manhattan. The film combines “live action” footage and in-camera double exposures. This footage is then further layered by superimposing and bi-packing the camera footage with handmade and hand-painted film frames created by the filmmaker from plants and flowers she gleaned in Riverside Park. The ambient sounds come from both Riverside Park and the filmmaker’s childhood home in northeastern Missouri.

A recycled film that addresses our culture of waste. According to a Cornell University research report, eleven thousand tons of trash a day are discarded in New York City, and 15 to 40% is food scraps that could and should be composted. In “Compost Confidential,” handmade botanicollage film frames, saved from unrealized projects, were put in a compost bin, left for several weeks, then retrieved and optically-printed. In the printing process, the sprocket holes themselves, usually outside of the frame, were intentionally revealed as an element inside the frame. The soundtrack, recycled from an audio project, features interviews with urban composters at the Union Square Greenmarket in New York City.

Plus some serendipitous CC surprises . . .

Please have a wonderful Valentines Day on Friday, February 14th, and show the world some love.

Please also note that all animation labs (and campus) will be closed on Monday, February 17th, in observance of Presidents Day.

We will resume regular open hours on Tuesday.

Once again, Northern, the Olympia All Ages Project, will be providing Northern Flickers events.

Support and celebrate the art of filmmaking!

Three evenings of screenings, three weeks in a row all at 7pm:

Each show runs about an hour

See all three featurettes in the Ima Plume Trilogy by Nancy Andrews of Bar Harbor, Maine plus every durn episode of Variable Area Television Network by Lori Felker of Chicago, Illinois

plus! at random moments sprinkled amidst the serializings:
Hedwig Page, Seaside Librarian by Nancy
and
Business Leisure News Information by Lori

Lori Felker chose Filmmaking as her official second language in 2003-ish, bumping German into third place. Eventual fluency is important to her, so she employs many forms/formats, practices frequently with others, and tries hard not to shy away from expressing her thoughts on human behavior, participation, frustration, failure, in-eloquence and political irritants. Lori has many lives to live simultaneously. They currently live, make films/videos, teach, project, program, and compulsively collaborate in Chicago.

*****
Nancy Evelyn Andrews lives on the coast of Maine, where she makes films, drawings, props and objects. She works in hybrid forms combining storytelling, documentary, animation, puppetry, and research. Her characters and narratives are synthesized from various sources, including history, movies, popular educational materials and autobiography.
She has been the recipient of grants and fellowships including: the John Simon Guggenheim Foundation, LEF New England Moving Image Fund, Illinois State Arts Council, The Franklin Furnace Fund for Performance Art (supported by the Jerome Foundation and New York State Council on the Arts), and National Endowment for the Arts.

Six of her films are in the film collection of the Museum of Modern Art and one is in the School of the Art Institute of Chicago Film Collection.

She studied at the School of the Art Institute of Chicago and received a Master of Fine Arts in 1995, and her undergraduate studies were at the Maryland Institute, College of Art, BFA, 1983. Nancy is currently on faculty at the College of the Atlantic where she teaches video making, animation, time-based arts and film studies.

Brooklyn based animator, and Evergreen Alumni, Marina Gagarina, has a new animated short that just came out for your viewing pleasure.

Marina was a true interdisciplinary scholar and studied animation and science during her time at Evergreen. Mainly working with faculty, Ruth Hayes, for her animation instruction, Marina also supported the college through her employment at the office of Electronic Media where she provided animation and multi-media support.

During holidays all the animation facilities will be closed:

The last time to checkout keys for using the animation facilities during the Thanksgiving week is on Saturday, 11/23, from 9am – 2pm.

During Evaluation week the animation labs will be open for backing files and exporting pre-existing material only. All files will be deleted after closing on Wednesday, 12/18. No production work until next quarter.

Questions???  Please contact staff in advance if you need to make special arrangements.

Starting this fall there are few changes with our facilities and locations given the re-emergence of the Communications Building.

Where to find things: