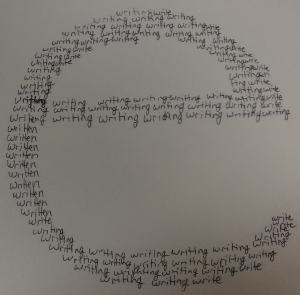 Writing fiction creates a world where we can explore the deepest elements of being human, and that is the goal of my novel. How to Survive Being Blessed is a story of those who have been touched by the gods. It is fourteenth century England, but the Greek and Roman gods are still worshipped. The gods have been proven to exist and people serve them as best as they are able. The gods are not always perfect but they care for their people, while the government is too tied up in protecting the wealthy to actually do things that matter very much for its citizens. There is Mauri, who has been blessed by Hermes and chosen by Morpheus to spread dreams all across the country. There is Clarabelle, who serves no gods, preferring to believe that humans could one day take care of themselves enough to not need the gods. Mauri’s son Tom has been touched by Ares and learns how to fight not just for fighting’s sake but for justice and those who have been wronged. Colin is a boy, has always been a boy, and it is just a matter of proving it to everyone else. He has been blessed by Morpheus and is held in high regard because of the way he pursues his dreams. Nightingale has been chosen by Aphrodite to bring people together. All of them go through trials and terrors because of the work they have chosen to do with their lives and the gods that have chosen some of the work for them, and all of them struggle to find themselves and survive in the wake of powers so much greater than themselves. More than just writing a story, I seek to answer what it means to write. Why do I feel the need to tell this story? What does culture say about women, fantasy, and bodily autonomy? I seek to listen and to counter all of these stories with tales of my own, using the Holdrege format to tell the story.

The novella I finished is included as an appendix to the Spring paper. It is 24,000 words long and encompasses the story of Mauri. I was unable to write the whole thing due to time constraints and the unexpected length of Mauri’s story. I hope to continue to work on the stories for the other characters and eventually turn it into a full length novel or series.

Abstract: How does my novel How to Survive Being Blessed recycle neurons? The first stage is taking ideas from culture to recycle into my own characters. The second stage is by using my own experiences. The third and last stage is by creating a story that is new and different from culture that will allow young adults to read about people who are like them, rather than the people that culture sees as beautiful or powerful.